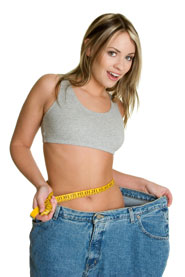 Calorie restriction has shown antiaging effects in laboratory animals and caused great interest in the scientific community about weight loss diets that could result in life extension.

The famous Baltimore Longitudinal Study of Aging has noted a pattern where the longest life spans in the human subjects corresponded with low body temperature, increased sensitivity to insulin, and higher levels of DHEA-S.

Caloric restriction with optimal nutrition is different from weight loss diets, in that there is a high nutrient density per calorie used in the experimental models.

In the experiments with lab animals, the feed was carefully chosen to provide a very well balanced diet with all the nutrients the animals needed for optimal health. The calories were kept low, about 30-40% lower than otherwise.

Scientist suspect that the restriction in calories may affect gene expression in some way that we do not yet understand. However common sense may also provide some clues. The diet used provided all necessary macro and micro nutrients, in the most efficient way possible.

For this reason, the animals did not have to consume a large amount of food to get the nutrition they needed. The diet kept their sensitivity to insulin high, and also resulted in low body temperature, possibly through reduced metabolic activity from the calorie restriction.

It would appear that the animals were able to get all the needed nutrition, while reducing the metabolic activity that would have been required to process a larger amount of food. The nutrient density of the diet fed these animals is the key to this effect.

Although it may not be accurate to extrapolate results from animal studies to human beings, it is highly likely that these studies will give us important clues about how best to eat for increased longevity.

Although I have no specific proof, I believe that the increased sensitivity to insulin in these studies is a positive indicator that the diet is on the right track. Low body temperature would seem to indicate this as well.

Recent research noted by Ori Hoffmeckler in his Warrior Diet book seems to indicate that experimental animals achieved the same or better results from cycles of fasting and overeating than just calorie restriction.

It may not be necessary to undergo constant restriction in caloric intake to get the benefits of extended lifespan and increased health. I will be reviewing Ori Hoffmeckler’s work in more detail on this site and will provide an overview of his dietary principles as well.

All of the evidence suggests to me that one of the most important factors regarding eating for longevity is keeping your sensitivity to insulin high, to prevent insulin resistance, and thus insulin overproduction.

Low body temperature seems more of a result than a contributing factor to any antiaging benefits from this dietary approach. It appears that some variation of calorie restriction adapted to fit the normal person’s lifestyle could provide important antiaging and health benefits for those who follow it!